Zoom the interactive map to display the 15 clickable waymarks or simply use the start link to follow the 13-kilometre trek in sequence. Each waymark (orange when active) contains individual images or animations. Still images can be enlarged for closer study. All pages are designed for display on laptop, tablet or smartphone. 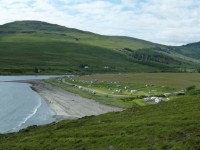 Glen Brittle beach car park before the campsite. (NG410205). Park on the right at the start of the beach and before the cattlegrid entrance to the campsite – www.ukcampsite.co.uk has details.

There is a small shop selling basic essentials. The beach itself is grey rather than white sand but it will be clean and there is always some exposed no matter what the tide levels. Rock pools at either end.

The more adventurous take a shower below one of the waterfalls which drain the Cuillins into the east side of the sea loch.

Looking south-west from Glen Brittle beach, the peninsula stretches down the left side of the loch towards the Rubh' an Dùnain headland itself. The sea loch is broad and attracts otters, seals, porpoises and the occasional basking shark. Although the beach shelves gradually, beware of offshore winds and an undertow on a strong ebb tide.

We head past the campsite, taking the path to the left of the toilets and strike up as though heading for Coire Lagan. We keep to the broad track and fork right keeping Loch Brittle on our right side. On the horizon, weather permitting, you can see the low, hunched profile of Canna. 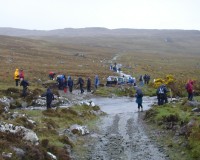 You are now in the foothills of some of the most majestic mountains in the UK. The immense gabbro walls of Sgurr Dearg, Sgurr Mhic Choinnich and Sgurr Alasdair (992m / 3256ft, the highest of the Cuillin range) surround Coire Lagan. Their scale is overpowering.

Keeping the loch on our right we take the broad track until reaching the Allt Coire Lagan stream. After heavy rain this may be in spate and impassable on foot.

There is a rough bridge a short distance downhill, then it's back to the track.

As we continue we take time to stop, look back and admire the fine view back up Glen Brittle towards Bealach a Mhaim, once the main cattle droving track to Sligachan.

Before The Clearances in the early part of the 19th century, the Rubh' an Dùnain peninsula, much of Glen Brittle and most of Eynort on the opposite side of the loch were once a single farm under the control of the MacAskill clan.

Care is needed fording further streams, one of which has a pretty waterfall. En route look out for a variety of species of orchid and for recent feathered colonists like the Great Skua. 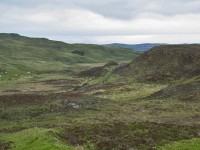 After about an hour's walk, we pass the sea cliffs of Rubha na Creige Moire. We take a path to the left before we reach the small knoll of Creag Mhor and climb inland until encountering a stone wall running across the peninsula on a natural fault line. This marks the Slochd Dubh (G. black ditch).

There's a gap in the wall for us to cross through keeping Creag Mhor on our right. The track continues parallel to the wall, then we bear right round the shoulder of Creag Mhor until a panorama of the island of Canna and the Small Isles appears ahead and the ground falls away to the headland.

The high ground towards Carn Mor to our right is worth a short detour for its expansive views of the ruined settlement, the Small Isles and on a fine day, all the way to Barra and the Outer Hebrides.

At a glance you can see why this headland was important militarily and geographically as a safe settlement in which to live and work.

We continue downhill towards the small loch in the distance. En route we stop to examine the ruins of the home of the chief of the Clan MacAskill. It was abandoned in the mid-19th century but its remains still dominate what was an extensively cultivated settlement.

View the associated picture to see a watercolour reconstruction of Rubh’ an Dùnain by the artist David L. Roberts, as it might have appeared in the mid-18th century. (Image courtesy of Skye and Lochalsh Archive Centre, High Life Highland.)

The headland was gradually abandoned during The Clearances as impoverished tenants left in search of new lives in the US, Canada and New Zealand. In 1863, the land passed out of MacAskill hands after 400 years of occupancy. Read more history

From the house head we walk downhill towards the east end of Loch na h-Airde, taking care to avoid the wet ground to the left. A short detour left brings us to a small iron age rock shelter in which traces of metal smelting were discovered.

At the loch's exit to the sea, there's a short scramble up the slope to the well-preserved ruins which give Rubh' an Dùnain its name (G. promontory of the little fort). With its 270-degree view of the western approaches to Skye, the Dun shows a drystone construction, intra-mural gallery, rebated entrance and low scarcement on the inside. It has never been excavated and its full extent was thought to have been much larger. It may have been used to signal to Eigg – 27km to the south. Barra is visible on a clear day. Read more archaeology 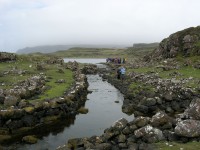 From above, you look down on the stone canal linking the loch with the sea. Mystery continues to surround its archaeology.

A boat timber dated to 1100AD was recovered from the loch in 2000, and several on-going studies have identified underwater wharves and evidence of nausts or boathouse docks. View a short clip from the 2018 BBC series, Scotland from the Sky, showing a dramatic graphic reconstruction of the sophisticated engineering work involved.

There is strong evidence of a Viking presence but whether they actually constructed the canal – unique in Scotland – to service an early medieval shipyard, is not yet certain. And who made the mechanism to maintain water levels in the loch? One thing is clear, Loch na h-Airde has more secrets still to reveal. Read more

From the canal, we head due west towards the very tip of the peninsula, crossing through some of the ruins of the settlement with the striking backdrop of the Cuillin ridge behind.

By the end of the 18th century, the headland was part of a substantial MacAskill farm covering much of Eynort and Glenbrittle, part of the Cuillins up to Allt Dearg and including the island of Soay.

The promontory itself was extensively farmed and supported more than 100 tenants. When the last clan chief left the peninsula in 1853, the farm totalled 37,500 acres and supported 70 men. Read more

We pause at the western edge of the headland for a last lingering look towards the Iron Age fort. It is not difficult to see why early settlers chose the location for a defensive structure. The fort has a 270-degree view of the coast.

With the naked eye we can see the length of the Sound of Soay, the 7-mile expanse to Canna and and the wider reaches of the Inner Hebrides as well as anything heading south from Loch Eynort and the north.

The fort also represents a 'see and be seen' approach, serving as a warning as well as a look-out and also acts as a marker for entering the Loch na h-Airde harbour and sanctuary.

At the very tip of the peninsula we consider the view from the sea. The main image shows a picture of Rubh' an Dùnain taken from sea kayak and clearly illustrates how easy it would have been to conceal boats in the loch and slipways from passing vessels. The entrance is hidden until very close to the shore.

A fine open example of a bronze age, neolithic passage tomb (2400 BC to 551 BC) which has yielded a beaker, flint scrapers and pottery shards.

Although much of the cairn's original contents have long been plundered and with them any human remains, the stonework and the skill and precision of the construction, is impressive. Renewed interest in the cairn and further scientific study may yet reveal more secrets.

It is time to turn for home, heading north round the western edge of Carn Mor to pick up the original track. The shoreline is dangerous – so we keep well above it.

The main picture shows a fishing boat making its way homeward towards Skye from Canna on a summer's evening. We can listen out for the thrumming wings of a snipe as twilight falls. 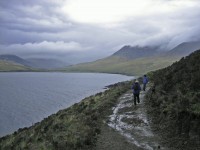 Follow the headland above the shore where there is a faint path along a shelf between the sea and Creag Mhor to eventually rejoin the main track.

Retrace your steps back to Glen Brittle beach.