From remote prehistory until its final abandonment in the 1860s, Rubh’ an Dùnain has been a dynamic hub of human activity . . . No directly comparable site in Scotland is known.

This near-forgotten settlement – now recognised as a historic monument of national importance – is one of the most exciting and mysterious sites of continuous human occupation in the UK. Layer upon layer of habitation over more than 5000 years are starting to be slowly being peeled away. From Mesolithic remains and Iron Age fort, to Viking invaders, medieval canal-builders, large-scale clan cattle farming and finally the sheep-driven clearance of a generation of Gaels, Rubh' an Dùnain represents a unique historical timeline.

Accessed most easily from the sea where it once dominated the western trade and naval approaches to Skye, its isolation has ensured its secrets have remained largely undisturbed. It is an area of unparalleled natural beauty and tranquility which touches the soul of West Highland heritage.

The peninsula is a narrow low-lying promontory of grass and heather moorland separating Loch Brittle and Minginish in the west from Loch Scavaig, Soay and Sleat to the east. It has uninterrupted views south to Canna, Rum and Eigg and is protected from the north by the vast Cuillin mountain range giving it special advantages both militarily and socially.

It hosts a rich diversity of flora and fauna. On the route you may see golden and sea eagles, skua, arctic terns and golden plovers among many other bird species. Look out to sea for porpoises and basking sharks, and for otters on or near the shore. Wild orchids are plentiful. 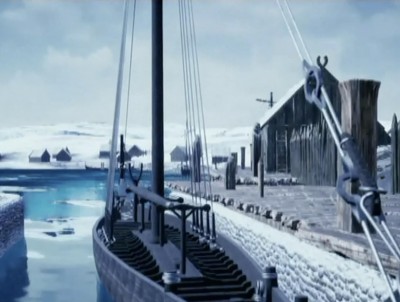 Study the area as it is today from the air and watch a video reconstruction of how it might have lt might have looked in medieval times as a Viking-inspired harbour.