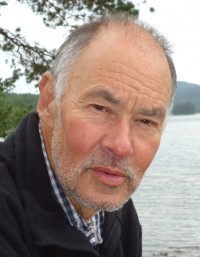 Martin, orginally from Derbyshire, studied archaeology at Sheffield University and was voted British Amateur Archaeologist of the Year in 1986. The following year he and his wife moved to Skye, exchanging working the land for surveying and recording the landscape.

Between 2002 and 2010 he co-directed the archaeological excavations at High Pasture and Fiskavaig Caves. Now retired he continues to indulge his love of archaeology and the island of Skye.

A Museum in the Landscape

For an archaeologist, the walk from Glen Brittle to Rubh' an Dùnain is a journey into the past, for once the monumental wall at Slochd Dubh (G. black ditch) is crossed, the evidence of man’s occupation of this part of Skye, from first settlement soon after the retreat of the last ice sheets until the Clearances of the 19th century, lies exposed across this unique landscape.

Rubh' an Dùnain offers the archaeologist and the interested visitor alike, the chance to study the evolution of a defined landscape – a landscape which has been adapted and controlled to suit successive waves of settlement, a landscape where the homes, enclosure patterns and burial sites survive as visible monuments.

The first people to spend time here were groups of Mesolithic hunter-gatherers (8000-4000BC) who travelled throughout the islands of the west coast on a seasonal round in pursuit of food and tool resources.

A site excavated at Kinloch on Rum between 1984 and 1986*, only a day’s boat journey away to the south-west, may be the winter base for these pioneers. A small rock shelter at Rubh' an Dùnain, partially excavated in 1932 by W Lindsay Scott**, contained many worked stone tools and the debris from their manufacture - evidence of repeated visits to the site during this period.

Later, during the Neolithic period (4000 – 2300BC), a chambered tomb (also excavated by Lindsay Scott in 1932) was built on the rise at the western end of Loch na h-Airde suggesting that a settled farming community now occupied the surrounding area. Finds from the tomb chamber included a beaker and many flint tools.

This community appears to have continued into the following Bronze Age (2300 – 700BC) as the smaller cairn, some 50 meters to the west beyond the field wall, indicates a continuation of the burial tradition in this area. In addition to the burial monuments, the ruins of round houses, which also probably belong to this time, have been found close by.

During the following Iron Age (700BC – 450AD) a massively-built defensive wall was constructed across the tip of the peninsula creating a small defended area on the edge of the cliff, suggesting that occupation continued into perhaps less settled times. During this period the rock shelter mentioned above served as a small workshop containing a smithing hearth and iron working debris - again discovered during the 1932 excavations.

There are no obvious monuments on the headland from Early Christian and Viking times, however occupation of the site appears to have continued as shown by the construction of a shipyard and a protected mooring in Loch na h-Airde which was, at this time, joined to the sea by a tidal canal. These improvements appear to be related to the long-lasting connection to the site, from the 12th century onwards, of Clan MacAskill who served first as Clan MacLeod’s navy and protectors of the southern seaways around Skye, and later as holders of the tack of Rubh' an Dùnain as evidenced by the well preserved early 18th century Tacksmans house and the surrounding ruins of the associated community.

The clearances of the 19th century brought about the end of activity on the headland with many of the MacAskills emigrating to the Carolinas and Nova Scotia in North America.

Nowhere else on the west coast of Scotland can a range of monuments which illustrate an area's history be so easily accessed and examined; whether it be the relationship of a farmer to his landscape, a laird to his clans-people or the organisation of an innovative naval base where the mooring basin, repair slips, associated buildings and access canal await study.

Rubh' an Dùnain is an open time-capsule waiting to be examined. To follow a short timeline of its history, read on.