The Isle of Skye became the property of several proprietors, who, in the four decades following 1840, would serve 1,740 writs of removal, involving nearly 40,000 people all of whom, whether they were removed or not, had to pay 10 shlllings for the cost of the summonses against them.

IT IS HARD to read any historical account of The Clearances without a deep sense of injustice and a bewildering disbelief at how one of the most civilised and generally prosperous nations of its time could inflict such wanton brutality on its own people – and adopt widespread indifference to their plight. 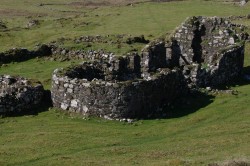 By the early 19th century Rubh' an Dùnain had, some archaeologists suggest, endured perhaps 6000 or 7000 years of continuous habitation; there is tangible evidence of neolithic, bronze and iron age activity and of early and late medieval settlement. Climate change over the millennia had a direct impact on the enduring patterns of life, society and culture; piracy, pillage and clan warfare were survived. But ultimately human greed and pitiless cruelty proved to be the more effective purgatives driving every last simple, hard-working person from the peninsula.

The finger of blame touches on the shoulders of many – the land-owning nobility, including sadly the clan leaders whose first concerns should have been for their kinsfolk; the factors, tacksmen and agents who saw change as a vehicle for their own gain; politicians, comprising many of the landed gentry; and the Church – itself entering a period of internal turmoil – but which emerges curiously as almost a bystander.

The pain and torment of the displaced Gaels is well documented in prose, poetry and song: what remains today at Rubh' an Dùnain, as at neighbouring Suisnish, Boreraig, Tungdale and countless other abandonded settlements and villages across Skye, the western isles and large tracts of the Highland Scotland, is skeletal.

The defeat of the Jacobite clans at the Battle of Culloden in 1746 marked a turning point in Scottish history. In its wake came waves of political and economic change which destroyed forever the Highland way of life. Clan society was effectively dismantled, the estates of the Jacobite leaders were forfeited and chiefs stripped of their powers. Highland dress was outlawed.

But it was agricultural change – and particularly the growth of mass sheep farming beginning around 15 years later – which arguably had the greatest impact. Traditional livestock husbandry had centred around celebrated Highland black cattle. Demand now switched to mutton and wool from Blackface and later Cheviot breeds whose spread north from the Borders was inexorable.

Cash-hungry clan chiefs and land-owners had already begun levying punitive rent increases on tenants struggling to cope with new agriculture methods that swept away the old runrigs, or field strips, in favour of large-scale grazing. Unable to pay their rents, many sold up and the first wave of emigration to North America was under way. Others moved to the coasts to pursue fishing, to enter military service, or to the lowland cities where misery of a different nature in the form of destitution and disease awaited.

All too soon, land-owners and their tacksmen saw that the economic returns of sheep-farming considerably outweighed haggling with impoverished tenants and so began clearing hills and glens of people to make way for sheep flocks.

On Skye, the estate factors of Lord MacDonald and MacLeod of MacLeod were relentless in their duties: in 1769 every single tenant left the lands of MacDonald of Sleat forcing the chief to import others from the mainland. In the 12 years years up to 1775 an estimated 20,000 emigrated – 54 ships sailed from west coast waters in one year alone. 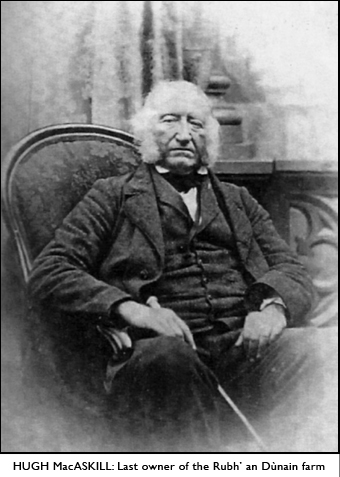 There was a short respite around the turn of the 19th century with the growth of the kelp, or seaweed harvesting, industry which needed substantial manual labour. Crofting townships thrived as did the population. But it all proved to be shortlived and persistent crop failures weakened the resolve and determination of the people.

The first large-scale influx of sheep to Rubh' an Dùnain was at the behest of the tacksman Kenneth MacAskill – 'Old Rhu' – in the first years of the 19th century. The Rubh' an Dùnain farm by this time had merged with several tacks and now extended across much of Glen Brittle as far as Carbost, Trien and Sartran.

It was no panacea and for those remaining, life continued to be harsh until in 1810 MacLeod of MacLeod sanctioned a three-fold increase in rent. This proved to be the final straw for the head of the MacAskill clan. Kenneth left Skye for North Carolina with his wife, family and many followers by ship from Loch Bracadale the following year. He did not give up his rights to Rubh' and Dùnain, however, and left a manager in charge, returning 10 years later.

'Old Rhu' MacAskill died in 1841 at the age of 79 and was buried in the churchyard at Eynort. His eldest son Donald who had become his assistant prior to the emigration, took over at Rubh' an Dùnain. But this was the time of the potato famine and eventually in 1847 he joined his brother Allan in New Zealand. The other children also all emigrated – William to Canada, with his brothers Kenneth and Alexander and sister Jane.

The Rubh' an Dùnain house and ancient settlement was now in serious decline. A second cousin, Hugh MacAskill from Talisker (Picture by kind permission, Patricia Leslie, NZ), eventually took over the tack, living in the larger house at Leasol (now Glen Brittle House).

Hugh, who died in 1863, was the last MacAskill to own the Rubh' an Dùnain farm. An eminent and successful businessman, as well as founder of the Talisker Distillery, his role in the fortunes of another prominent Skye family, the Tolmies, is fully explored in a fascinating book Four Sons of Skye, recently published in New Zealand, and reviewed here.

The 1841 census shows Donald, his wife Colina and family still in residence at the Rubh' an Dùnain house. But ten years later it was all over: the census records only the family of one shepherd. By 1861 there were no residents: land reform and crofters' rights were still 25 years away.

Too late. The peninsula was desolate – and so it remains to this day.