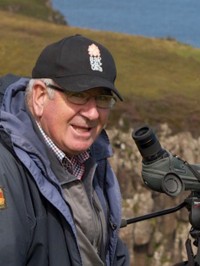 Retired to Skye from Perth in 1999. Has a lifetime interest in wildlife, especially birds and has studied several species of birds of prey, currently Hen Harriers.

Though most walkers have a keen interest in wildlife, for many it does not reach the stage of systematic recording, a process now made easier with the availability of online submission forms and phone apps.

Rubh' an Dùnain is little different from much of Skye, where bird recording has been extremely limited. Even during the national Bird Atlas from 2007-11, only sample tetrads were visited in each 10km square and Rubh' an Dùnain was not one of them.

The walk from Glen Brittle will often reward you with a view of Golden or White-tailed Eagle. Both species are well studied on the island and most breeding territories known. Visits to the hill lochs might also reward you with views of other classic highland birds like Greenshank, or Red-throated Diver, but sadly we know all too little of their breeding distribution or success, so there are opportunities for citizen science to play its part. 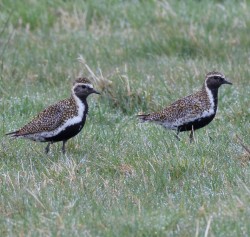 Summer passerine species include Skylark, Meadow Pipit, Wheatear and Stonechat. Breeding Golden Plover (pictured) and the occasional Dunlin are on the moorland and along the coast there are breeding Shags and Black Guillemots on some of the better crags.

The Great Skua or Bonxie is a recent colonist and if you start being dive-bombed you will realise there are breeding birds nearby. Loch na h-Airde is in a wonderful position to host migrating wildfowl and waders in spring and autumn.

The Rubh is ideally placed for sea watching throughout the spring and autumn with Gannets, Auks and Shearwaters streaming through on feeding excursions from their breeding colonies. The Gannets here are probably from St Kilda. The Puffins, Guillemots and Razorbills are from the breeding colonies on Canna. The Manx Shearwaters, often on huge rafts at sea, are from the internationally important colonies on nearby Rum.

Seawatching can reap rich rewards with a late spring passage of Long-tailed and Pomarine Skuas, heading up the west coast and it’s often in rough weather that the rarities turn up. With the chance of Minke Whale, Basking Shark, and several species of Dolphin, the potential of Rubh' an Dunain for serious seawatching has yet to be realised.

Winter days are short and most bird bird life tends to be on the coastal fringes. Turnstones and a few Purple Sandpipers visit the rocky shores from their northern breeding haunts. Great Northern Divers, with their haunting calls, will arrive from Iceland, Greenland and even Arctic Canada, to exploit our rich fishing, mixing with the resident Red-breasted Mergansers and Eider ducks.

A walk across the moor might flush the occasional Snipe, or a Woodcock, again visitors, but from Iceland and Norway, enjoying the benefits of our milder winters. Throughout the seasons, the area has much to offer and much to be discovered about its birdlife, so make your visit count, by recording what you see.