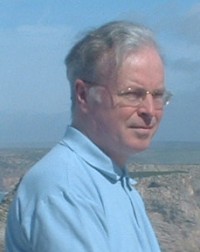 Dr Stephen Bungard is the Botanical Society of Britain and Ireland's official Vice-county Recorder for VC104, North Ebudes which in layman's terms means Skye, Raasay & the Small Isles. He is the author of

A Flora of Raasay and Rona as well as the Rare Plants Register for VC104.

On 15 May 2015, Stephen led the Skye Botany Group to Rubh' an Dùnain for a brief field study. You can download the results from Section 5 of our Library here.

He maintains an excellent blog.

Look out for a lochside rarity

From orchids to orchid beetles, the plants of Rubh' an Dùnain are typical of low-altitude western headlands on Skye – rich in colour, variety, interest and with the potential for exciting new finds.

Notable species include Common Centaury (Centaurium erythraea) which is not common on Skye but never very far from the coast, and Crested Hair-grass (Koeleria macrantha) which on Skye is almost entirely restricted to the west coast, though commoner in the Small Isles. At Camas a' Mhùrain (G. Bay of Marram) there is no official record of that plant there – perhaps a better search will find it.

Loch na h-Airde is the only site on Skye from which Spiral Tasselweed (Ruppia cirrhosa) has been recorded. It was found together with its close relative Beaked Tasselweed (R. maritima) which is more frequent locally, though still not common. In the light of recent taxonomic studies blurring the distinction between the two species, it may be that this needs to be looked at again.

In boggy areas near Carn Mòr there is Great Sundew (Drosera anglica) and Lesser Bladderwort (Utricularia minor) and in the far west there is Pale Butterwort (Pinguicula lusitanica).

The shore has a variety of seaweeds, mostly of the red or brown groups. It may be that the alien seaweed Codium fragile known commonly as green sea fingers, dead man's fingers and various other names is waiting to be found as it is spreading around Skye.

A plaice of interest

The surrounding sea is perhaps the most likely place to see large animals, with seals, otters and in summer, basking sharks and the occasional whale all quite possible.

On land, rabbits or evidence of rabbits are most likely but you could also see common frogs and toads, red deer, fox, voles or adder. Common lizards are likely to be visible on warm summer days.

Sea birds, are described in detail here but include cormorants and shags, gulls, oystercatchers and small waders. On the moor, meadow pipits and twite, cuckoos and skylarks are to be seen and heard. Lapwing, snipe, curlew and grasshopper warbler have all been recorded and if you are lucky you may see golden or white-tailed eagles or at least a buzzard or two.

Four species of fish that can tolerate brackish water have been reported from Loch na h-Airde: eel, plaice, three-spined stickleback and a goby.

Insects abound in the summer months with bees, butterflies and moths, dragon and damsel flies and beetles well worth a close look. The Orchid Beetle has been seen here; adults occur from May onwards and frequents flowers during warm weather. Common and Highland Darters are to be seen at Loch na h-Airde.

The shore is of course home to various species of marine fish, crustacean, echinoderm and mollusc and much more – especially if you are there at the right tide for a rock pools. Sea squirts, sponges, sea slugs, moss animals, sea anemones and jellyfish are all part of the rich marine habitat along the shore.

There is much more to be discovered. For example, in the land-based arthropods one centipede and one harvestman have been recorded but no ants or woodlice.