Who holds the key?

Rubh’ an Dùnain, though now uninhabited and deserted, has a history of human occupation from the Stone Age to the 19th century.

Throughout this time its people have left traces in and above the ground. These have not been disturbed by modern building or intensive farming, so the peninsula is an untouched repository of evidence about the lives of its inhabitants for thousands of years. The key to unlocking it is archaeology and science.

The bogs and lochans contain pollen, layered through time, which through analysis can chronicle Rubh’ an Dùnain's environment and the changes wrought by nature and human activitiy. Loch na h-Airde, which over the centuries has fluctuated between salt- and fresh-water environments, should provide a sensitive indicator of sea-level changes. Traces of cultivation can be recorded by airborne survey.

Upstanding archaeological monuments, many of which have been investigated in the past, should be re-examined using the latest methods. As far as possible investigations should be non-intrusive, so that evidence remains intact for future generations and more advanced techniques. Excavation is destruction, and should only be considered when specific questions cannot be addressed with minimal damage.

The canal and nausts or boat docks show that Rubh’ an Dùnain has been a focus of seafaring since at least the Norse period, and probably from its earliest days. This aspect should be investigated further and comparisons sought elsewhere in the North Atlantic world. A similar site has already been identified on Eigg.

Who will turn the key to unlock the secrets? And when? Dr Martin was interviewed on site for BBC's 2018 series, Scotland from the Sky, which delivers a dramatic graphic outline of the canal area. 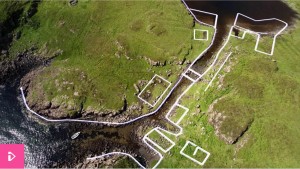 Loch na h-Airde deserves special study. It has already produced evidence of Norse-period boats – more probably lies on the loch bed. Further searches should be made, though only unburied items recovered at this stage. The area around the quay where the canal enters the loch will have been a prime hub of activity.

In Gaelic Horizons: Professor Hugh Cheape of Sabhal Mòr Ostaig, explains how the Gaelic language can deepen our understanding of the history and many cultures which the peninsula has hosted.

Study Dr Martin's detailed analysis, A Highway Into History, which examines in detail the research that has stimulated international interest in Rubh' an Dùnain and sets out what needs to happen next.