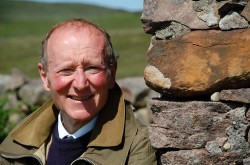 Devised and teaches a postgraduate programme, MSc Cultar Dùthchasach agus Eachdraidh na Gàidhealtachd (‘Material Culture and Gàidhealtachd History’), at Sabhal Mòr Ostaig, University of the Highlands and Islands. This followed a curatorial career in the National Museums of Scotland (1974-2007). He is the author of several books including Periods in Highland History (1987) with I F Grant; Tartan. The Highland Habit (1991, 1995, 2006); The Book of the Bagpipe (1999), Bagpipes. A national collection of a national instrument (2008) and he has edited 'A very civil people': Hebridean Folk, History, and Tradition. Essays by John Lorne Campbell (2000, 2014).

Taking account of the range of monuments at the coast edge around Loch na h-Airde and the outcome of surveys in recent years, Rubh’ an Dùnain seems to be a treasure-house of human and environmental information.

We learn of Bronze Age and Iron Age remains of conventional type such as Chambered Cairn and Roundhouses, and the promontory Dùn recognised in the principal place-name of the peninsula.

More exceptionally, the loch with its quay or ‘wharves’ and its channel or ‘canal’ link of more than 100 metres to the sea offers less familiar information about possible boat docking, repair and building activity over an extended period. Four boat ‘cradles’ have been identified, a feature described as a ‘naust’ by archaeologists but known in the Islands as barra or bara.

Material discoveries so far include a wooden boat fragment from a probable clinker-built vessel dateable to the period of transition from Viking rule to the Lordship of the Isles, from the time when Somerled defeated the Norse at sea until their control of the Isle of Man and the Hebrides was ended with the Treaty of Perth in 1266.

Rich evidence for the Norwegian hegemony has survived, for example, in place-names and seafaring terms such as stiùir (rudder), acair (anchor) and bìrlinn (a type of ship), all absorbed to an extent into Scottish Gaelic.

Intriguingly, the tacksman family who traditionally occupied the site as ‘coast watchers’ for the MacLeods, the MacAskills of Rubh’ an Dùnain, take their kindred name of MacAsgaill from a supposed Viking eponymous ancestor, Asgall, of about 1180. The tobhta or remains of their house, associated buildings and areas of former cultivation are recognised and the historical record suggests abandonment in the 1850s. Their maritime role suggests also that Loch na h-Airde may have been a medieval boatyard, an hypothesis of national significance in the existing material record.

Rubh’ an Dùnain might seem isolated from mainstream life today, but it serves to challenge a modern mind-set’s concepts of core and periphery. With the sea as a highway, this coastal site with its strata of evidence must have been intimately connected to axes of movement and a cultural complex stretching from the Mediterranean, Iberia, through Ireland and the West of Scotland and on northwards towards the North Cape.

The well-worn term ‘migration’ has been subsumed under the more enabling ‘connectivity’ which offers a more dynamic framework for understanding this complex.

Information to be drawn into research now includes language, literature and local tradition. Gaelic has much to offer. Songs recall the ease of movement by sea and sea-travel over distances as a commonplace. Trade from the Gàidhealtachd into France and Spain was so familiar from the sixteenth century (and earlier) and songs recall these past centuries.

This was a cosmopolitan society, sharing in the arts of the Renaissance and moving in European circles. MacLeod of Dunvegan, for example, was celebrated as Renaissance-man:

[‘In London and in Paris you excelled hundreds,
Your fame has gone over across the land of Egypt’]

In the current knowledge of early boat-building and boat-related material, assumptions are made that our information originates in Scandinavia but Rubh’ an Dùnain can provide a point of reference for an indigenous Gaelic tradition as part of the evolution of a northern European clinker-built technology and focus of the remarkable sea-power of the medieval Hebrides. The archaeological and historic environment of Rubh’ an Dùnain suggests a long settlement history from potentially the Mesolithic into the early 20th century.

In the historical period Gaelic was the vernacular of this region. Understanding how folk subsisted here and what they did will be enhanced by ‘reading’ the rich cultural landscape through the medium of Gaelic. Study also of its natural history can be enhanced by a knowledge of Gaelic, since how the environment impacted on or was exploited by an indigenous population can best be explained by the language and terminology of that culture.

Such topics are embedded in research undertaken at Sabhal Mòr Ostaig, for example, in the MSc in Material Culture and Gàidhealtachd History programme. Though not neglecting the evidence proffered by other disciplines, our premise might contemplate how Rubh’ an Dùnain is represented in Gaelic before considering the information articulated from outwith this society and culture.